Several years ago I was contacted by a woman who was in the process of buying a house in the historic Gillespie Park neighborhood in Sarasota. The 1920s house came with a detached garage in not-so-great shape, placed awkwardly in the middle of the yard and she wanted to replace it. Then she had a few big life changes, including moving out of the country, and the plans for the garage were put on hold. When she called back last year, she no longer wanted to just replace the garage. Instead, since the main house was being used as a vacation rental, they wanted to add a garage apartment that could also be rented out. Historic Shed™ designed a two-story, two car garage apartment with details that complemented the main house with a one bedroom, one bath layout. We also included a large porch for a private sitting area for visitors, accessed by an exterior stair. The cottage is available for rent at: https://www.vrbo.com/811457 So far, it has some rave reviews.

Historic Shed was contacted by a couple who live in the Hyde Park historic district in Tampa to design a garage and guest room for a very unusual lot. Triangular in shape, their small lot was just over 4,500 sf and contained a lovely one-story Craftsman bungalow with less than 1,000 sf. The atypical lot was further constrained by a large protected oak tree on the site, and one on a neighbor's lot, just over the property line. With Tampa's strong tree protection ordinances, this left little space to build. Building up was the only real option to maximize the remaining lot space.

After tweaking the design to fit the lot and meeting with Tampa's Historic Preservation Office and Forestry Department, the resulting project created a 12'x20' one-car garage with apartment above. A 6'x8' one-story shed allowed additional storage while accommodating the lot's shape and giving a visual step down from the two-story volume to the street. The stairs were placed at the rear of the building for privacy with an exterior design that allowed them to encroach within the required oak tree setback.

The garage design itself took its cues from the main house which had a low-sloped front-gable roof and very wide eaves. Walls were clad in lap siding and an existing skirt board was inspiration for a belt course on the new building. The new outbuilding was kept simpler in architectural detail, but clearly complementing the main residence.

See more about the Two-story Garage-apartment options. A two-car version is in the works as well.

Due to the increased price of lumber and the inability to get the products we prefer for our sheds and other buildings in a timely manner, we are temporarily pausing quotes for new projects. We are doing this in order to maintain the quality and design style that Historic Shed™ is known for. We apologize for the inconvenience, and hope that lumber and other material pricing and supply chains stabilize soon. 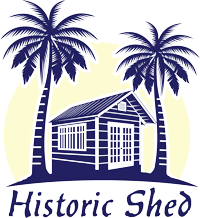