One of our customer favorites is the tropical Snack Shack that we built in Palm Harbor with combination bar and storage shed. The shed design was recently adapted for a narrow site behind a historic Craftsman style home in the Old Seminole Heights Neighborhood in Tampa. The resulting shed was 8'x18' version with framing details that complemented the historic home. The shed was approved by the local historic preservation office.

One of the perks of being in the preservation business is seeing all sorts of great historic sites that aren't always available to the public. When we worked primarily as historic preservation consultants under our Preservation Resource, Inc. mantle, we got to crawl in attics and private rooms of house museums, disused hotels, and even airplane hangers. Now, as we focus on making outbuildings for historic neighborhoods, we get to see private homes that aren't open to the public (I never say no when invited inside for a moment). One of the recent highlights was seeing a high-style Craftsman style bungalow in the Old Northeast neighborhood in St. Petersburg that was under rehabilitation.

Known as the Sargent House, 806 18th Avenue NE was recently designated as a historic landmark by its newest owners, Sharon Winters and Kendall Reid. Originally built in 1923 by LeRoy and Marjorie Sargent, the house is significant for its architecture as a rare example of higher-style Craftsman design and construction in the airplane bungalow type. (See the full report at: http://www.stpete.org/committee%20packets/Community%20Planning%20and%20Preservation%20Commission/2016-04-12%20Reports.pdf). A local landmark designation recognizes structures or places that have historic value or that exemplify cultural, economic, or social value to the city, state, or nation. The benefits of this designation include neighborhood stabilization, increased heritage tourism through the maintenance of our historic character, relief from some of the requirements of the Florida Building Code, and an ad valorem tax exemption.

Historic Shed was hired to design and build a small storage shed to be placed behind the house. The simple shed incorporated elements from the house such as the gable detailing, roof pitch, and outrigger design. 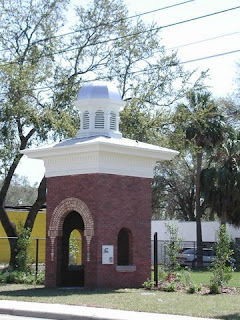 Preservation Resource, Inc. has been extremely fortunate to have worked as Historic Preservation Design Consultants on the I-4 Improvement Project in the Ybor City National Historic Landmark District in Tampa, FL. The majority of the project was spent rehabilitating homes relocated out of the proposed highway right of way. However, one part of the project allowed us to design and construct a new free-standing structure: a bus shelter.

While bus shelters typically do not make designer's hearts race, this one is one of my favorite projects to have worked on. In part, this is because it is the first completely new, free-standing structure I ever designed that was actually built. We have completed remodeling/ rehabilitation projects of existing historic buildings and have built many additions, but when these types of projects are done well, your work is rarely even noticed because it looks as if it was always there. Starting from the ground up gives a different sense of accomplishment.

The shelter was first conceived when we were asked to create a commemorate monument for the long-vacant historic George Washington Jr. High School. The school was located within the proposed highway expansion right of way, and when relocation and leasing options for the building were determined not feasible, the school was demolished. Among multiple options proposed for commemorating the site, the 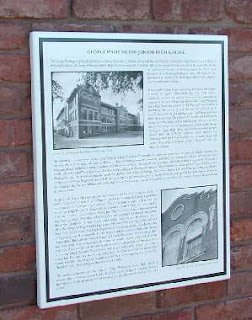 idea of a bus shelter constructed out of materials salvaged from the school was chosen, to be operated by Hillsborough Area Regional Transport (HART).

The marker utilizes salvaged brick, one of the original cupolas and reflects design elements from the school building while meeting ADA accessibility requirements. A commemorative plaque was installed on the structure educating passer-bys of the school's history. In addition, wood flooring, interior doors and other architectural elements were salvaged from the building to be reused at Woodrow Wilson Middle School, a still functioning school with the same original design as the George Washington. Other items were salvaged for use in Public Art Projects by the City of Tampa and HART.